Suction Gun Types of sandblasting machines are the most common blasting machine used in several organizations; its cabinet has two hoses attached and one delivering compressed air, one vacuum hose drawing media into the section gun of this sand blasting machine. Meanwhile, its Pressure-blast nozzles have only one larger hose to deliver a mixture of media particles while doing sandblasting.

Moreover, its suction-blast systems are so prevalent, because under-performing blast guns slow down the process and it may result in finish variations that can’t be accepted at all. However, you need not repeat its adjustment process repeatedly.

At processing time, its compressed air is metered into a suction-blast gun with the air jet of this machine. Meanwhile, it also generates a powerful vacuum in the media delivery hose that draws media particles to the section gun of this sandblasting machine. These Particles mix with the flow of air and are projected out through the nozzle of this machine.

Meanwhile, its pickup tube has vents that allow you to increase or decrease the amount of air in the mixture to make it more effective. Not only this, air reduces the number of media particles that are entrained in the flow of air to the section gun of this sandblasting machine. 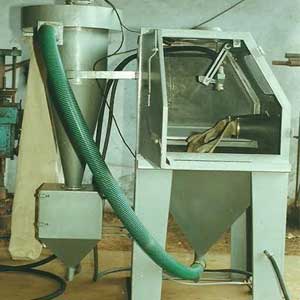 However, it will not matter if you are working with a single-gun manual blast cabinet or a multiple-gun automated system; the adjustments are the same, but Multi-Blast machine owners may have to repeat the procedure for every blast gun at the time of operation.

Tell Us What Are You Looking For ?